skip to main | skip to sidebar

Everyone should be allowed to pee even in Syracuse 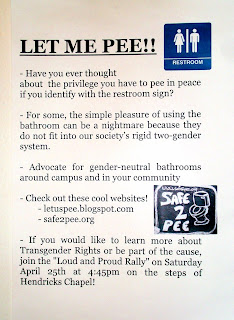 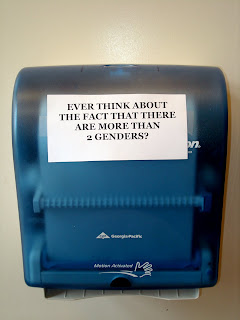 We are writing you from the campus of Syracuse University in Upstate New York. With the help of our Sociology of Sex and Gender class, we have become concerned with the gender issues on our campus. We are unhappy with the gender binary that is constantly perpetuated in our society and we wish to challenge and question it. We decided to focus on one of the only gendered spaces left in our society ? public bathrooms. A small group of us decided to do something about this problem, although none of us identify as transgender, we agree that this is a real issue for some students/faculty and as your blog says, everyone should be allowed to pee. Within a couple of hours early in the morning, we managed to cover over 200 bathroom stalls throughout 20 major buildings with signs and fliers raising awareness of the gender binary that our campus so religiously follows. We wanted to get people thinking about the strict two gender policy that is enforced on us. We also wanted to get people to join us at a rally being held for LGBT rights.

Throughout the process we noticed that our signs were being taken down quite rapidly. There were even cases in which we watched faculty ripping down the fliers minutes after we put them up. Without the University's stamp of a 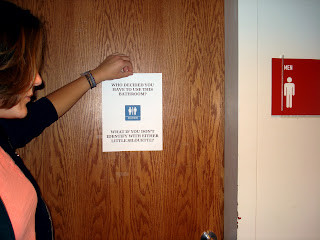 pproval on any of the signs, it is questionable exactly why they were taken down so fast. Was it because they weren't stamped? Was it because they didn't approve of our message? Either way, we believe it made people take a step back to consider our society's rigid two-gender system. We heard quite a few students talking about the signs throughout the day and a journalism student was even interested in doing a story about the issue of gender-neutral bathrooms. We think that together we can make a difference and raise awareness, even if it starts with a couple of signs. We hope the many readers of this blog feel compelled to also take action and share their stories.

The sky didn't fall in Chicago 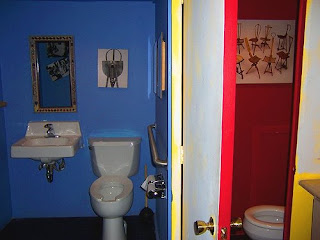 I work just north of Chicago in a building that houses a number of arts organizations. I regularly work for two of the arts organizations in the building, and had been out to both of them as trans for a while. I was impressed with their responses (the artistic director of one said, "Great! So, what shows have you been working on lately?" and the other said "Well, if people have a problem with it we can say 'fuck off.'") but, as I wasn't ready to transition yet, it didn't really change my interactions with any of them, or their conduct around me at work.

When I did finally transition at work, my full-time employer didn't have a problem. The building is city-owned, and Illinois has gender identity as a protected class, so it wasn't really their "problem" which bathroom I used in the first place. However, I work with kids in my job at my part-time employer. The board member I was working with to figure out how/if I should come out to my students and their parents really wanted to include language about bathrooms, saying "That's going to be every parents' primary concern." She even went so far as to say that I could use (and tell parents I would use) one of the private bathrooms.

I told her, in no uncertain terms, how humiliating it was for her to even ask me to do that, as well as how illegal (by my admittedly non-lawyer reading of "access to public accommodations" in the Illinois non-discrimination laws). I was particularly hurt because she has known me since I was a young child, had been completely unphased when I came out to her, and I thought she 'got it.' We went back and forth for a couple of days, and it looked like we weren't going to be able to come to an agreement, when the chairman of the board finally interjected and said "Screw the parents' 'comfort,' take the bathroom language out."

Since then, I have transitioned at work (both at my full-time employer, my part-time employer, my students, and the building at large) and no one has given me any problems. Indeed, a number of fellow employees, students, and parents have told me that I have their support. Obviously, it would be nice to live in a world where that was expected as the norm, rather than the exception, but I'll take what I can get.

To make a long story short, I've been using the women's bathroom for almost four months now and have not had a single 'incident' with other people who work in the building, with parents, with students, or with coworkers. Indeed, building employees (the only ones who could really make trouble for me) were really happy for me when I came out to them.

Peeing happily in Chicago
Posted by Let Me Pee at 6:34 PM 1 comment:

Bathroom questions from around the internet

One of the reasons this blog was started was as a response to the accusation that non-discrimination laws for gender identity and gender expression would allow "men in women's public restrooms to commit violence" - which incidentally these types of laws do not, a person that commits a crime would still be prosecuted for committing a crime. But often the bathroom issue is being used by the "family values" type groups aka the radical right as way to deny civil rights to transgender people. Sometimes these groups or even the sensationalist media like to pose the question about sharing a restroom with a transgender person. Here is a link to one of those polls, I am sure they were disappointed to find all the people surveyed did not care.

And this question posed about using the opposite gendered bathroom... is it rude? the writer asked

Blending humor with formal interviews Wrong Bathroom exposes the battle for entry into gender specific restroom spaces for those who don’t fit into the cookie-cutter silhouettes outside the door.

Ever thought you were in the wrong bathroom? You know, when the person exiting the stall before you creates confusion as to which bathroom you entered. Maybe she was too tall, or he was too skinny, causing you to question the person's gender and your choice in bathrooms.

Imagine a life, where, on a daily basis, you must prove you are in the 'right' bathroom. By going where few videos have gone before, Wrong Bathroom blows the stink out of the stall on this civil rights issue. Public restrooms historically have been a place of discrimination and harassment. From the segregated bathrooms of the South to the fight for women's restrooms in the workplace, access to public restrooms has long been a civil rights issue. 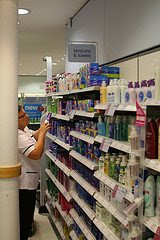 Dear Let Us Pee,
I get excruciating periods, which ravage my body physically sick, incurable by Peptobismol, and I am screaming with pain for at least one, if not two days a month. I had orientation for a course and was all but crying on the way out. Luckily, my friend had it too and had driven us. I asked that we had to stop at Walgreens immediately. I made my way around the store as quickly as possible getting tampons, anti-nausea liquid, and Midol. When I got up to the counter, I asked the guy who rang me up if I could use the rest room. I followed him to the back, and he punched in the code on the mens room door before i could protest. Not wanting to make him uncomfortable, I thanked him and went in. I took the anti-nausea medicine, did my business, but then realized... there was no place to put the wrapper to the tampon, so i had to keep it in my pocket and put it in the trash once outside. On top of it all, i threw up the anti-nausea medicine five minutes later.

This situation was touchy because, i didn't want him to be uncomfortable... did he know i was not a boy? If he did, he may have been trying to make me feel more comfortable.. but regardless.. single stall bathrooms need not gender biases.

Single stall bathrooms don't care which gender you are
Posted by Let Me Pee at 9:44 AM 1 comment: 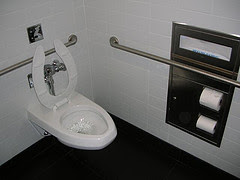 While traveling with some people through rural Pennsylvania, we hit a rest stop. I am tall, my hair was short and I was wearing 'mens clothes.' Despite my huge tits, as I headed into the bathroom marked WOMEN, the fellow minding the store shrieked at me, 'THAT'S THE WOMEN'S BATHROOM!' I turned slowly and glared at him, whereupon it dawned on him that I was not a dude and he bumbled an apology. After I finally broke my silent death gaze, I went in and peed, wondering why the hell the guy is 1. gender policing bathrooms, 2. gender policing single occupancy bathrooms.*
Sincerely

*I don't really understand why any bathrooms are gendered, but the absurdity of gendered single occupancy bathrooms is extreme.
Posted by Let Me Pee at 9:25 PM 1 comment: